We are back to being a three vehicle family again!

It was a little rough there for a few weeks.

We've had two vehicles out of commission,
and we found out that our mechanic of 22 years
closed up shop.

I'm sad we don't have Barry as a mechanic anymore,
and I'm also sad for him to have to have a boss again.
I expect that's a little hard
after being your own boss
for a few dozen years.
It's a wonderful gift to have a mechanic that you trust,
and now we've got to start all over again with somebody else.

I'm holding off on forming an opinion just yet
of the new place,
but let's just say that the first vehicle we had in there
had to go back,
and the the second one
cost almost $100 more than he'd told me it would.
so things aren't looking super just yet.

All three of them!

I happy danced and cried,
both.

They went to a super sweet gal in California
who plans to use them as art
and treasure them,
and pass them on to her daughter.
💚

It was an excellent reminder to me that God does things in His time.

A few weeks ago,
after getting an e-mail from Etsy
telling me that I needed at least 10 things in my shop
in order for people to find my stuff,
I sent an entire Sunday afternoon
making some chapstick holders to put in there. 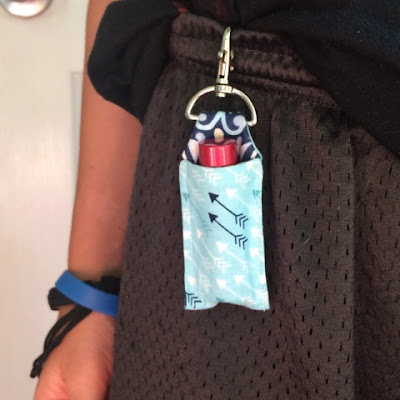 It didn't go real well.
They took waay too long,
and I ended up trashing 2,
and giving 2 that weren't in what *I* considered sale-able condition
to Josiah and Lexi
and all I ended up with after several hours
was 4 little lip balm clip things
that I could sell for maybe $3-$4 a piece. 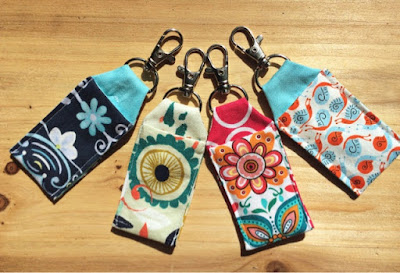 It hardly seemed worth the time to take and edit pictures
and list them.
Plus,
we all know about me and the post office....
Did I really want to have to make a trip
(or - let's be real - send Brandon)
to the post office
for what will end up being
maybe $1.50 to add to  a sewing machine fund??

I don't think so.
So then, they sat there taunting me.
"how is anybody ever going to find your quilts
with only 3 items in your shop?"

But God showed me
He's got this.

Work has been super crazy for Tyler,
so we aren't getting in as much work on the house as we'd like,
but - we finally have everything primed,
all ceilings are painted,
and we have color on the walls in Brandon's room.
so -yay!!!

My sewing machine is still in Fayetteville,
though it is finally ready for me to pick it up.
I guess I will do that Monday,
since we'll be painting when they are open tomorrow,
and they're closed on Sunday.

While waiting on the machine,
Lily helped me baste the two quilt tops so they'll be ready to go
when I get my Juki back.

She's actually getting to be a great basting helper
(but I still have to repeat an awful lot,
"smooth it from the middle out...")

Since any wonkiness in Sojourner would be especially obvious,
I wanted to make sure it stays nice and straight,
so in addition to spray basting,
I ironed it also,
and then thread basted with tailor tacks
for good measure.
(but not as close together as if I hadn't sprayed)
Lil' threaded all of the needles for me,
which was another huge help.

Having not noticed any improvement from the absence of it,
I've actually had a couple of half cups,
which I've thoroughly enjoyed.

Lexi will be teaching her Sunday School class this week.
She has spent hours working on her lesson,
and enlisted the help of Lily and Josiah
to make a couple of games,
then got Brandon to take her to the store to buy snack
to go along with it.
(She's doing Ruth and Naomi, and got 100% wheat bread,
which she was very excited about.
She was also quite excited that it came with it's own twist tie!
which made me think,
my children should maybe get out more ;-)

It seems like I had more stuff to record,
but I can't remember at the moment
and it's time for me to start fixing dinner soon
(BLT salads, since one of Tyler's friends gave us some garden tomatoes.
yum!!)

Well.
Another kid is taller than me.

Along with my wheat, grains, and sugar,
I have temporarily given up coffee.
and dairy.

We'll see if anything comes of it...

It was actually much easier than I expected
but I gotta be honest,
I was really hoping yesterday
that Tyler would forget I wasn't drinking coffee
and make me a cup.

I would have had to drink it to not be rude....

My Juki is in the shop.

Brandon took her up to Fayetteville for me on Saturday.

I was hoping he'd also
come back with her
on Saturday,
but they don't have technicians over the weekend.

Tyler and I spent 7 hrs
out working in the house Saturday.
we've got everything but the upstairs bathroom
and the media room primed.

It was soooo hot!

I told him I'd never sweat so much in my life.

He said, "You said that last year.
Doing electric.

I told him this year's sweat trumps last year's!

I was chugging water
and pouring salt in my mouth,
but it wasn't enough,
and that night,
I also had the worst headache I've ever had.

I had it all day yesterday, too,
but the pain had lessened considerably.
I still have a remnant of it this morning.

I absolutely
positively
have to have paint picked out and purchased
by Friday.

Remember a few weeks ago,
when I shared my new project sketch?

It was paper pieced,
darn it,
but it was perfect for the quilt I had in mind. 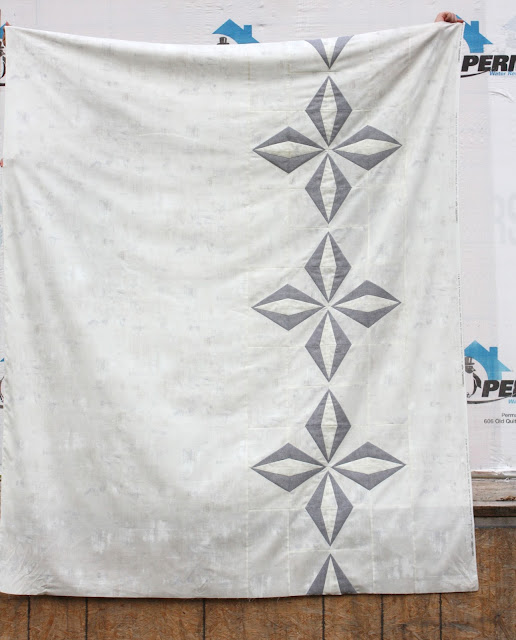 I got off to a super rocky start,
which isn't all that surprising,
seeing as how it's me.
But it's such a simple pattern,
I sort of expected I could handle it,
since I've had a good bit of practice...

The first day of paper piecing was absolutely awful
and if I hadn't already cut up all of my fabric,
I would have gone back to my original
(much easier, much less 'wow')
plan
of 4 patches on point. 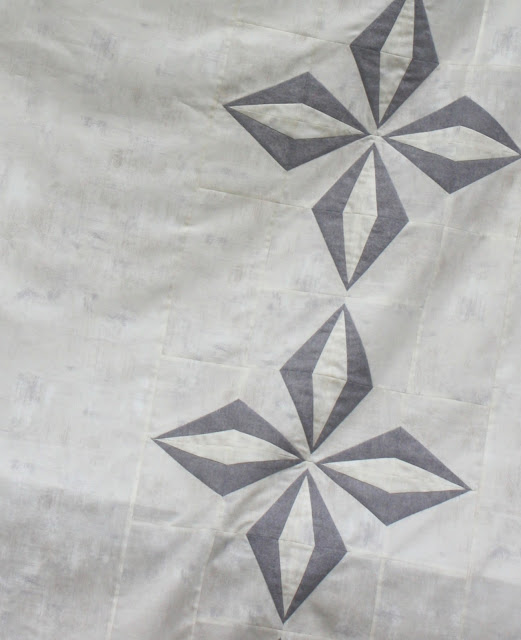 The second day was a smidge better,
and the last 2 dozen units
were made without any mistakes!

I'm going to try a minky backing with this one,
which will be a first for me,
so if you've got any tips, I'd love to hear them! 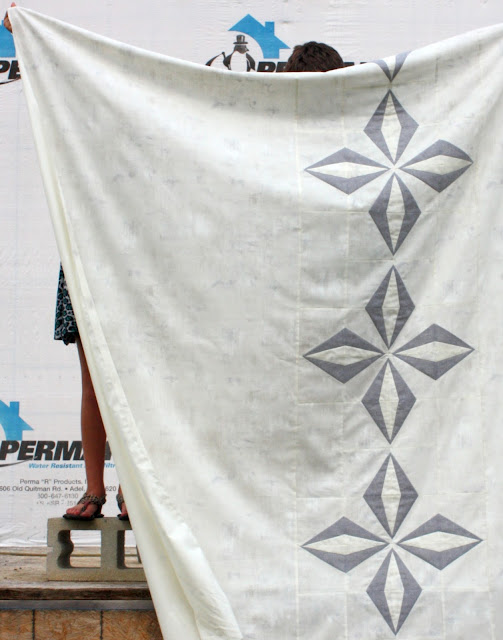 My second finish,
Sojourner,
has been in the works for quite a bit longer. 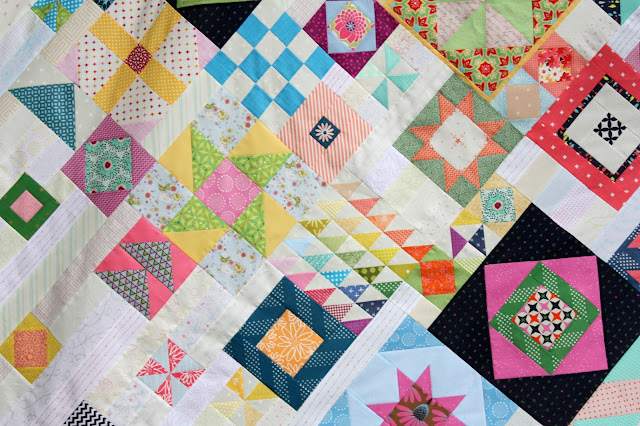 I am really pleased with how it turned out!!

I had several 'I'm not sure about this' moments along the way,
but I am soo happy with it now.


I accidentally gave myself a ton of partial seams in this quilt,
so it took a lot longer to sew together
than I'd anticipated
once the blocks were all sewn up.
Fortunately everything fit together really well,
so it wasn't hard
as much as it was overwhelming. 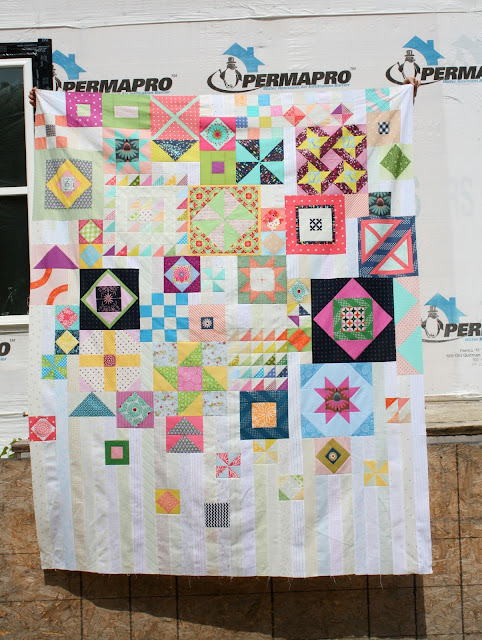 It was inspired by Kathleen Riggins version
of the Gypsy Wife quilt
(although I have already reminded my client
that my quilting
will be nowhere near as spectacular as Kathleen's.


Mercy, that girl has skills!)

My sewing machine needs to go in the shop
before I attempt to quilt either of these, though;
my machine won't allow me to move the quilt in all directions : /

I hate to make a trip to Fayetteville just for that,
but I also don't want to have to wait too long to get started.... 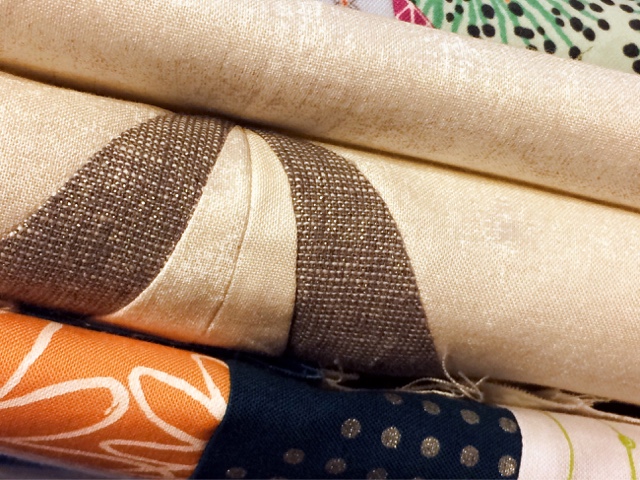 linking up with pincushion queen Amanda Jean
Posted by the momma at 12:58 PM 8 comments:

You know life has been extra full
when it's been over 10 days since I last posted,
and Tyler hasn't even mentioned it.

But you know what?
we aren't done priming everything
and painting ceilings yet,
so that's okay.

We had a super laid back 4th of July celebration
with the McC's.

My chest only tightened about 2 dozen times,
so that's a definite improvement over recent years. 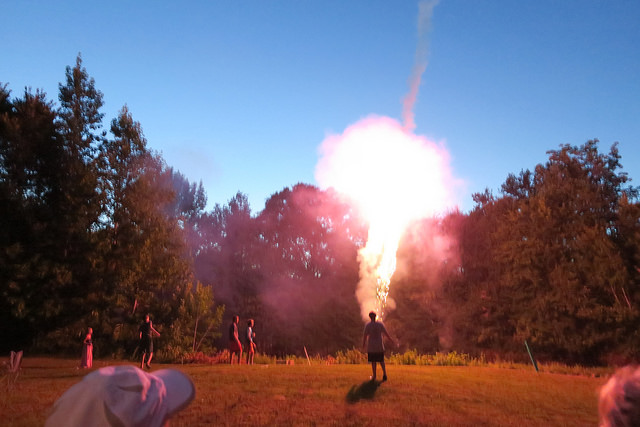 It wasn't a crappy fishing trip;
they were fishing for crappie
(in case you were confused... ;-)

While they were gone -
I spent 14 hours on Friday
working on my commission quilt.

I took up all but about 5 inches of the kitchen floor
for most of the afternoon
and all of the evening.

I'd made most of the blocks,
and cut all of my  background strips
before I took over the floor,
but I'd saved all of the flying geese blocks,
and about half of the square in a a square blocks
so that I could make what was needed to fill in color gaps.

I ended up deviating from my 'pattern' a bit
and moved a few blocks around,
remade a few others,
trimmed a couple,
and vetoed some completely,
so I ended up hogging the kitchen
much longer than I'd anticipated.

The kids were so sweet about it though,
and since we couldn't cook in there,
with a quilt all laid out on the floor,
Brandon picked up Taco Bell for their dinner.

I can't even begin to guess how many collective hours
we have worked,
(mostly the kids and I,
(girls more than boys)
but Tyler has helped some)
to get all of the drywall mud and mess off of the floors.

Wednesday,
we spent an hour out there
(so, 5 hours of labor all together)
and we finally finished the downstairs!!

I don't think you can fully appreciate this
if you haven't experienced it.

Tyler actually started the whole cleaning process
several weeks ago,
because I was so completely overwhelmed with the mess,
I couldn't even figure out how to begin.

If we ever build another house,
we are putting brown paper down
everywhere
before any drywall related person
sets foot in our house,
I can tell you that!

Tyler had his first experience of being referred to as
an 'older guy' on Saturday.

He was a little miffed about it.

Which is kinda funny,
because he's always running his mouth about how
he likes getting old.

I guess he doesn't like (over)hearing
that other people think he is, though ;-)

~
We went to the Windsor library the other day
which is the one that we usually go to,
but hadn't been to in a while.

The librarian was so happy to see the kids!

She told me she'd called the other branches
to see if they'd stolen her family!

It's nice to be known
and wanted. 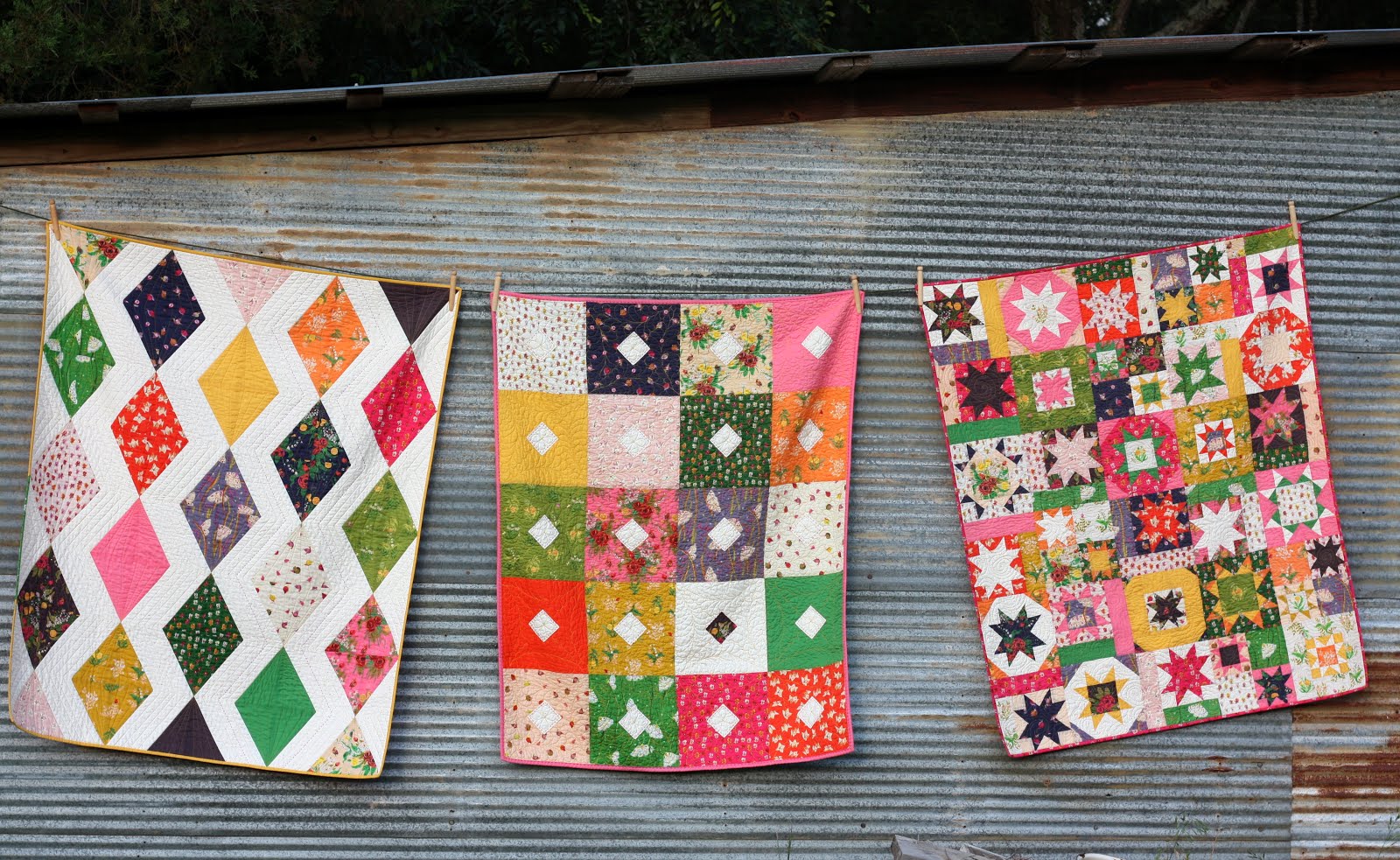 the momma
I am a sinner, saved by grace. I love Jesus, my husband (Tyler) and my children, but, sadly, not always in that order. This blog serves as a scrapbook for our family; it's my place to record new memories, as well as reminisce about old ones. Our goal - as a family - is to serve the Lord with all of our hearts, souls, minds, and strength. Sometimes we fail miserably - or at least, I do; thank God His mercies are new every morning.